Legionella is a bacterium that is naturally found in water and grows best in warm water. Transmission of Legionella is not passed from person to person; rather, it is contracted when the person inhales droplet nuclei in mist or vapor form containing the bacteria. 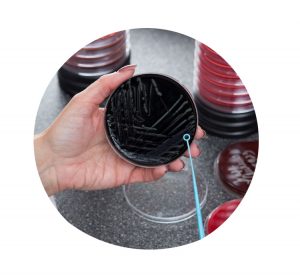 Legionnaire’s Disease, Legionella pneumophila, is one of the most challenging building acquired diseases affecting the industrial hygiene community. According to the CDC about 6,000 cases if Legionnaires’ disease were reported in the United States in 2015. However, because Legionnaires’ disease is likely under-diagnosed, this number may underestimate the true incidence. More illness is usually found in the summer and early fall, but it can happen any time of year.

Individuals most likely at increased risk to develop Legionnaires’ Disease are those with compromised immune systems or lung problems, such as smokers, persons that are 50 years or older, the very young, chemotherapy patients, or individuals with illnesses such as diabetes, kidney failure, liver failure or chronic lung disease.

Legionella are gram-negative rods and require selective media to grow. To date, there are 58 known species of Legionella and about 70 serogroup have been recognized to cause disease in humans. The most common species that causes Legionnaires’ Disease is Legionella pneumophila Serogroup 1.

The natural habitats of Legionella are environmental waters like lakes, streams, and rivers; thriving best in warm waters. Natural rubber, plastics and wood influence the growth of Legionella while copper inhibits the growth. Any water sources in a building could be a reservoir for Legionella, if conditions are conducive to LDB growth.