Microbiologically induced corrosion (MIC) or Biocorrosion is corrosion of metal surface due to the presence of microorganism that are present in biofilms. For corrosion to occur, the environmental conditions should be conducive and also active MIC microbes should be present. Most common cause of corrosion is formation of biofilms by the microbes on the surface and the increase metabolic activity causes corrosion or destruction of the metal surface. MIC is due to activity of multiple groups of microorganisms. These include both anaerobes and aerobic bacteria and some fungal species. The most common MIC bacterial consortium are grouped as iron related bacteria (IRB), Sulfate Reducing bacteria (SRB), Nitrifying Bacteria (NB), Acid producing bacteria (APB) and slime forming bacteria (SLYM) 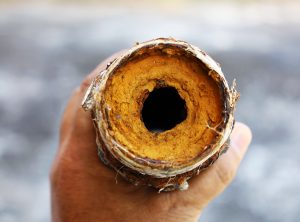 Nitrates in water can be potential health risk, particularly to infants who have not yet developed a tolerance to nitrates. Aggressive nitrifying bacteria in waters may indicate the latter stages of aerobic degradation of nitrogen-rich matter. This can indicate that the water may have been polluted by nitrogen-rich organics from sources such as compromised septic tanks, sewage systems, and industrial and hazardous waste sites and is undergoing an aerobic form of degradation. They are of high importance in drinking water systems and wastewater affecting the quality of water. Nitrifying bacteria are also indicators of efficiency of purification process for waste water treatment.

Sulfate-reducing bacteria are a group of anaerobic bacteria that generate hydrogen sulfide. This by-product can cause a number of significant problems with water that range from “rotten egg” odor to the blackening of equipment, slime formation, and initiation of corrosive processes. They mainly contribute to the tuberculation and galvanic corrosion of water mains, acid corrosion of metals and also destruction of concrete sewers. They also cause odor and taste problems in water and also biofouling of water wells.   Sulfate-reducing bacteria are difficult to detect because they are anaerobic and tend to grow deep down within biofilms as a part of the microbial community.