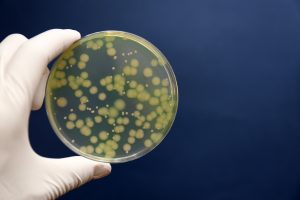 Pseudomonas is gram-negative rod bacteria and the most commonly isolated species in a group called  “non-fermenters”. There are many different types of Pseudomonas bacteria. Only a few types can cause an infection and they are commonly found in the environment and associated with water and moist environment. They are strictly aerobic. They grow on MacConkey agar and are oxidase positive. The most common species is Pseudomonas aeruginosa, found commonly in moist environment. They commonly produce a green pigment in culture and highly oxidase positive and are considered to be a major cause of nosocomial infections.

Pseudomonas aeruginosa is gram-negative, aerobic bacteria commonly found in soil and water. This bacteria are also opportunistic pathogens in healthcare settings and hospital water systems. Pseudomonas aeruginosa is considered to be a plant pathogen.  It can be isolated from spas, water therapy equipment, medical devices, catheters, ice machines, respiratory therapy equipment and almost any area with available water.   After Legionella pneumophila, it is the most common waterborne pathogen and can be resistant to many antibiotics.